The Reality of Being a Student in America Right Now 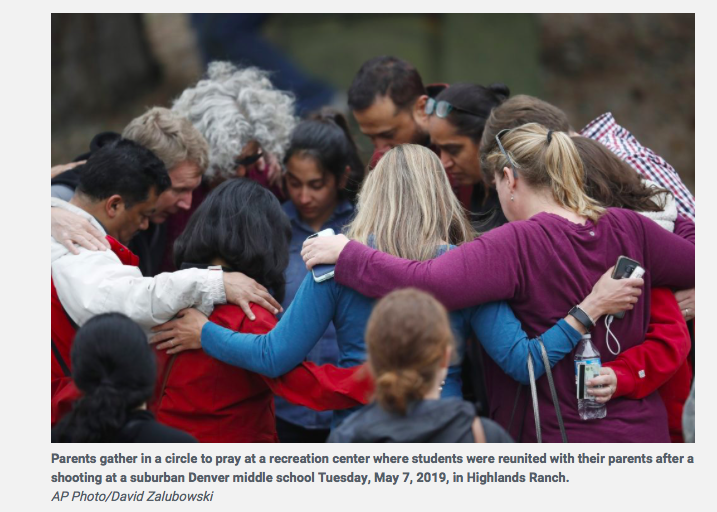 In the last two weeks, students in Colorado had schools shut down, locked down, and sadly, shot down, making national headlines for a school shooting once again.

It is a fear that grips our children every day, from elementary school through high school.

As parents, none of us are equipped for this.  For our teachers, faculty and administrators, it is an epic task that many would not have signed up for.  How do we keep our children safe at school? What steps do we need to take to ensure that this violence and these deaths stop?

When 12 year olds are in the news saying that they want “to go down fighting” and a sixteen year old Colorado teenager authors pieces like the one below in response to her teacher’s request, it shows how deeply we have failed our children and how urgently we need to address this.

Please take a minute to read what it feels like as a student today.  And think about what you can do to address this.

“I am writing this sitting at home at 11am on a Thursday. Today is the third day in the last month that I’ve had to miss school due to a school shooting threat.

Two days ago senior Kendrick Castillo was shot and killed in a shooting at a school a few miles away. Instead of attending his graduation, his family will be attending his funeral.

To say that gun violence has consumed and ravaged the education experience in America is an understatement. I think that as students we carry a great deal of fear in going to school. We practice lockdown drills at school regularly. We’ve memorized where we would hide in each of our classrooms if a shooting were to start. You want to not be in a 3rd floor classroom because it’s harder to jump out the windows if you have to.

This is the reality of being a student in America right now. And it’s infuriating. We are angry and we deserve to be. Our politicians are failing us.

A lot of people don’t want to “make this political” but the truth is that this is in every way political. But it shouldn’t be controversial. I cannot believe that we need to debate whether or not kids being killed in school is normal.

But most students—the direct victims of our country’s lack of gun control—aren’t old enough to vote.

The people creating gun legislation are the ones who have no idea what it’s like to crouch in the corner and pray that the classroom door doesn’t open and a shooter walks through it.

As much as we’re desperate for change, our voices can’t yet be represented.

So I think I speak for most students in America right now when I beg people to do something. If you can vote, vote. If you can march, march. If you have a phone, call your legislators.

Don’t let yourself grow numb to this. This will keep happening, and kids will keep dying, until people finally say that enough is enough. Until then, we are all just waiting and hoping that we’re not next.”

Ready to do something?  Please contact Moms Demand Action.

The USA Lags Behind the Rest of the World in Banning Harmful Pesticides
Spirit of Change: How Your Happy Hour Can Help America's Farmers

Robyn O’Brien is the co-founder of rePlant Capital, an impact investment firm, deploying integrated capital from soil to shelf in order to build soil health and financial resiliency for farmers. She is also the founder of Do Good, a strategic advisory firm, and the AllergyKids Foundation. Random House published Robyn’s book, The Unhealthy Truth, in 2009, and her TEDx talks have been translated into dozens of languages and viewed by millions around the world.
By Robyn O'BrienMay 10, 2019